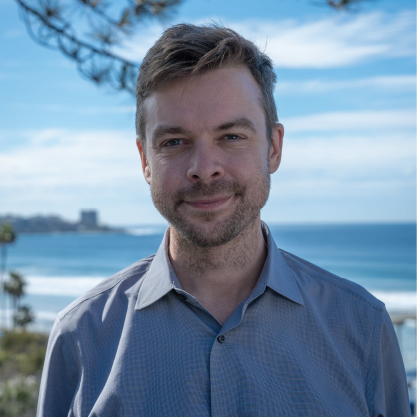 Professor Jack A Gilbert earned his Ph.D. from Unilever and Nottingham University, UK in 2002, and received his postdoctoral training at Queens University, Canada. From 2005-2010 he was a senior scientist at Plymouth Marine Laboratory, UK; and from 2010-2018 he was Group Leader for Microbial Ecology at Argonne National Laboratory, a Professor of Surgery, and Director of The Microbiome Center at University of Chicago. In 2019 he moved to University of California San Diego, where he is a Professor in Pediatrics and the Scripps Institution of Oceanography. Dr. Gilbert uses molecular analysis to test fundamental hypotheses in microbial ecology. He cofounded the Earth Microbiome Project and American Gut Project. He has authored more than 300 peer reviewed publications and book chapters on microbial ecology. He is the founding Editor in Chief of mSystems journal. In 2014 he was recognized on Crain’s Business Chicago’s 40 Under 40 List, and in 2015 he was listed as one of the 50 most influential scientists by Business Insider, and in the Brilliant Ten by Popular Scientist. In 2016 he won the Altemeier Prize from the Surgical Infection Society, and the WH Pierce Prize from the Society for Applied Microbiology for research excellence. In 2019 he was elected to the Philosophical Society of Washington. He also co-authored “Dirt is Good” published in 2017, a popular science guide to the microbiome and children’s health. He founded BiomeSense Inc in 2018 to produce automated microbiome sensors.