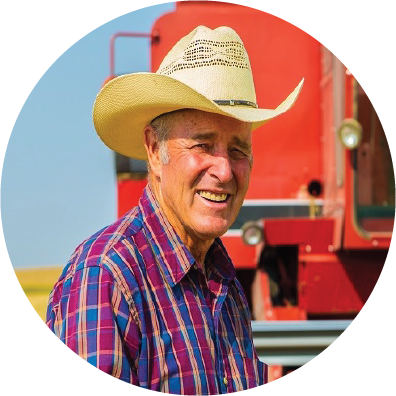 Robert “Bob” Quinn—the 2007 recipient of the Montana Organic Association Life- time of Service Award—is a progressive leader in promoting organic and sus- tainable agriculture throughout the state of Montana, and the  rest  of  the  world. The Organic Trade Association awarded Bob with the “2010 Organic Leadership Award” for his contributions in the “Growing Organic Agriculture” category and in 2013, he was named the recipient of Rodale Institute’s Organic Pioneer Award.

In 1986, Bob’s company Montana Flour & Grains introduced the natural food industry to an ancient Egyptian wheat, called khorasan (similar to durum wheat). This grain was marketed under his own brand name, KAMUT®, (the ancient Egyp- tian  word  for  wheat).  Through  the  trademark,  Bob  has  been  able  to  preserve an ancient grain and guarantee it has not been genetically modified or altered. KAMUT® Brand khorasan wheat  is  grown  under strict production guidelines and is exclusively grown organically.

Bob Quinn has taken  on  an  influential role  in  farming, even  inspiring state leader, U.S. Senator, Jon Tester, to  convert his farm to organic production and then become a grower of Kamut® brand wheat. Over 2,000 different KAMUT® Brand khorasan wheat products are being marketed through the world providing a new, sustainable crop for many organic farmers. Bob, a Farming Futurist, is always looking for ways to improve and sustain the land. With two partners from Germany, he formed WindPark Solutions America, which was responsible for the development of Montana’s first large scale wind farm from 1999 until 2005.

Continuing to be at the forefront of farming developments, Bob works closely with Montana State University personnel on testing of crops, including dry land vegetables for local markets, as well  as  new  farming methods. These  systems may be the next wave adapted to the northern plains and will provide a substitute for the use of conventional fertilizer, pesticides, summer fallow and diesel fuel.

On a mission to educate and farm eco-consciously, Bob is currently working on a project designed to grow and process high oleic  safflower on his farm, sell it to restaurants and then recover  the waste  oil. This used oil is returned to the farm, cleaned and used as straight vegetable oil (SVO) to run what he hopes will soon be all his tractors and combines. His goal is to develop a model that could be adapted to farmer owned co-ops scattered throughout rural America.

Bob is a member of the Montana Grain Growers and the Montana Farm Bureau (FB). He is a past president of the Chouteau County FB and has served on  the American FB’s  Wheat  Committee and  Grain Quality Committee. He  has also been active in AERO (Alternative Energy Resource Organization) in Montana and received AERO’s Sustainable Ag Award in 1988. In 1993, he was named as one of Montana State University’s 100 outstanding alumni from their first hundred years.

Additionally, he  helped form  Montana’s first Organic Crop  Improvement Association (OCIA) chapter in  1987  and served as its first president as well as on the international board of directors, receiving its outstanding member award in 1991. He served on the first U.S. Department of Agriculture National Organic Standards Board and has also served on a USDA agriculture research advisory committee. He served on Montana’s first organic certification advisory board.

Bob continues to farm full time and to promote organic and sustainable agriculture, locally produced food and fuel as well as promoting the idea that  food  should be  our  medicine and  medicine should be  our  food. He  also  promotes food production systems based on producing high nutrition and quality rather than high yields. For Bob Quinn, exper- imenting with crops is the most enjoyable part  of  farming. He  earned a  PhD  from  the  University of  California in  1976 and studied to be a plant scientist. Academically, his first love is growing plants and his whole farm is his laboratory. His love of the land continues to fuel his desire to change the agricultural landscape of America—one grain at a time.